I have been commissioned to write two Micro-Opera librettos for ROH and JYPA’s Lost and Found project. They are to be performed at St Pancras International station on International Women’s Day 2022 (8th March, around lunchtime).

I enjoy creating forms which overtly mix high technology with deep ecology and myth. I half-jokingly entitled this work ‘Digital Shamanism’, a label that seems to be sticking, so I’m just going to go with it. As such, I am keen to explore augmented and virtual realities which will enhance our connection to the natural and perhaps even the supernatural.

During lockdown 2020, I went to the same patch of woods every day for a month and did some free writing whilst communing with nature. Finding a voice for the inexpressible is integral to my work. I like to make multi-layered texts which speak out of the darkness, whether that be nature, the unconscious or mythological and archaeological layers around us.

Mirror felt like a very personal project, but my friend Jodie Saunders was looking for sound pieces at the time, so I went back to the woods and recorded my words, looking at ways of representing the idea of mirrors and reflection of audio. The resulting piece, Mirror, became a reflection on reflection and reflections.

It has been played on BBC Radio 3 and is to be released by NMC recordings online as part of their Big Lockdown Survey project. 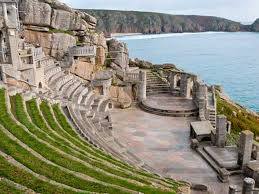 I was selected for the iconic Minack theatre’s emerging playwright program and invited to write a play for younger actors. Covid-permitting, this will be performed in October 2020.

“Forces” asks what would happen if a green revolution happened tomorrow and whether humans have the practical and emotional capacity to survive in tune with nature.

The brilliant maternal journal project, developed in association with Kings College London have asked me to contribute a creative journaling idea to their portfolio. This is the finished product. Click the picture to link through to more guides by artists and poets such as Holly McNish, Bridget Minamore and more. 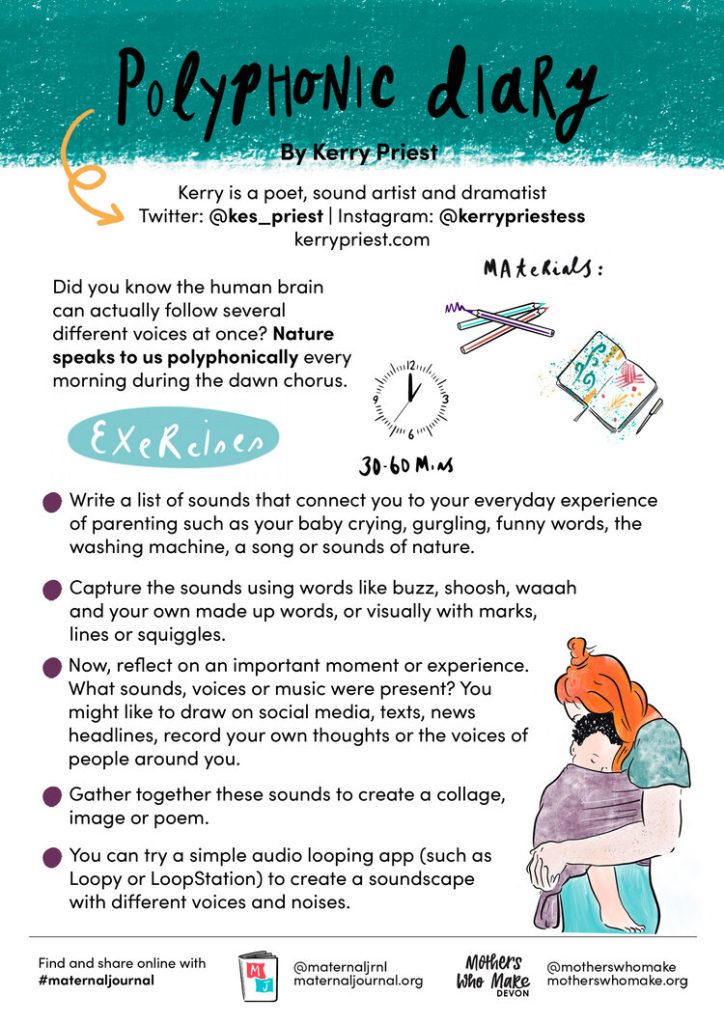 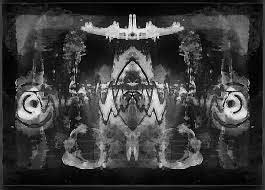 “On The Trail of Joan Lyneham” docu-drama was commissioned by FIMTEC and broadcast on Resonance FM and Soundart Radio. It tells the story of Joan Lyneham, the mysterious music pioneer who disappeared during WW2 and how several musicians and artists have been working to recreate and revive her ideas.

In 2016, I nearly died. Both of my lungs collapsed and I then contracted pneumonia in hospital. This experience led me to appreciate my lungs and vocal tract, and even the air itself. I spend the next few years exploring extended voice techniques, beatboxing, sound poetry and vibrational singing. This culminated in several projects, including an improvisation with the band Tin Moth for Soundart Radio.

In the piece Air, I use the international phonetic alphabet and extended voice techniques as my sound palate, often overlapping several voices polyphonically.

We made radiophonic pieces, combining drama, documentary and dramatic verse. For example, DNA Unravelled, a collage of voices talking about their reasons for taking DNA tests. I wrote a backing track made up of the notes AGC and the sound ‘t’, representing the four base types found in DNA sequences. The people interviewed were from the shamanic community of Devon and many had been involved in ancestor-worshipping rituals as well as taking modern DNA tests.

Also, Robyn Hoode. Broadcast on Soundart Radio 27th April and starring Emma Stansfield and Tom Eastwood, this was a version of Robin Hood based around an illegal rave in Sherwood Forest. The Green Man made an appearance., along with a soundtrack of Jungle breakcore made by myself.

This was following on from two summers’ studying with Stevie Wishart and Alice Oswald at the Dartington International Festival. I wanted to deploy Polyphonic principles from Early Music and World Music in order to better capture the motions and cycles of nature.

Why polyphony? Polyphony is all around us. Nature is polyphonic (just listen to the dawn chorus).  Some anthropologists believe the earliest human music would have been polyphonic. Poetry is meant to be heard aloud and what better way to hear it spoken than to hear two or more poets interweaving, bringing their different perspectives into play and creating mesmerising sound collages. That was the idea anyway.

I intend to revive my polyphony choir. Get in touch if you want to join.

Two pieces of surround sound audio for an installation have been presented in Medellin, Colombia, as part of the Fiesta del Libro y la Cultura.
The first piece, Fingle Gorge is an attempt to connect with the hidden layers – mythical, prehistoric and Mesozoic in the ancient woodland near my home where I walk every day. All the sounds are made entirely from the human voice, manipulated by various digital effects. It is a part of the overall area of my work of deep ecology, drawing together inner and outer landscapes which I tentatively call “digital shamanism”.
The second work, Blackbird, Gulls and Surfer is a poem for multiple voices based on observing sunrise on Teignmouth beach, Devon. All the sounds are made by the human voice. The arrangement combines iso-polyphony with aleatoric techniques in order to mimic the cycles of nature. The link for that is below in the Polyverse section.

I was invited to play music for the bank holiday on the terrace of the South Bank, with the London Eye right behind me, as part of Twat Boutique. My selection took in Italo and Mutant Disco and some electronic oddities. I have DJ’d extensively in the past. Being a regular for Disco Shed, Itchy Feet, Hodgepodge has taken me to Latitude, Bestival, Thekla and many more venues, but this was quite a special location.

It happened like this: I woke at dawn on the 21st and wrote poetry to capture the moment of the summer solstice.

For the evening performance, I created a sculpture of mic’ed up instruments including a sheep skull, catkins, pine needles, rocks and sheep bones. Some I played across a giant drum skin, others I used contact mics and violin bows while simultaneously reading the poetry.

Click the picture above to see the full performance.

The Assisi Machine explores storytelling through myth, dramatic verse and dialogue. It was broadcast by Radia.fm and syndicated to 21 stations worldwide in August 2018.

The Assisi machine is the story of a machine that can translate birdsong into human speech. The machine’s creator has died under mysterious circumstances and his machine is at first thought to be a hoax.

The drama unfolds through extended drone sound pieces where we hear a machine trying – and eventually succeeding – in translating birdsong. And, it turns out that the birds speak in poetry.

The dramatic movement is not through dialogue or gesture, but through the interplay of poetry and drone music. (Drones are a recurrent theme of my practice, as they force us to focus on change, which in this case drives the drama.)

Tin Moth is a drone project made by a group of like-minded radiophonic explorers working out of Dartington Hall’s Soundart studio. In the audio link above, we are improvising Drone music using circuit bending and home-made electronics.

We are sometimes invited to perform live shows. We have appeared at Islomga Festival of Sound, as well as Music is Murder Exeter.

We, well I especially, am kind of obsessed with drones. They work as realpolitik and metaphysics, which is odd.

First, there is the drone of the sitar or the bagpipes, which Indian musicology says is the sound the universe makes. It may or may not also be the music of spheres, either way, it keeps the world in existence. This drone works busily behind the scenes, just like worker bees, who are also drones.

Drones Over Keyham were commissioned to close the Plymouth Art Weekender in September 2018. We put together a special set, called Art Is Dead using homemade instruments made from skulls and bones, as well as an 808 Drum Machine and other electronics.

Drones are an all-girl Electro-Punk-Art kind of band. We were also ‘fresh find of the week’ on BBC Introducing in May 2018. We have been described as ‘the best band in the Plymouth underground’, which I guess is something.